First of all, I would like to wish all my viewers a Happy New Year.

2014 started wet and windy at Glenariff for the Ballymena Runners organised Race Over the Glens. This is a popular race over 5.5 miles and this year the race started at the Visitors Centre and progressed to the lower car park , half way along the entrance road towards the entrance of the park , up to the upper slopes and then down to the bottom of the glen and back to the lower car park by the return route.

As I was trying to find a posotion to photograph the race the runners passed me on the outward leg and I witnessed the dangers of this type of running as one of the leaders had retired from the race with a serious gash to his knee with blood running down his leg. He was attended to by first aiders who were following the runners but I am sure the wound required further attention possiblilty at casualty after the race.

The race was won by Jarlath Falls of Ballymena Runners for an amazing 8th time I think. I have shown a photograph of Jarlath when he was well clear of the field as he was about to start the descent to the finish.

Conditions were horrendous for the race - wind and rain, yet 331 runners finished the race incluging about 80 plus ladies.

Two "aged over 75 category " runners completed the race - Ken Hawtin of North Down AC in 306th place in 1:11:49 and Michael Spotswood in 325th place in a time of 1:24:26. Well done to these two gentlemen, I imagine they are both well in excess of 75 years which makes their achievement so impressive.

I should also like to mention Bridgid Quinn of Ballymena Runners AC who ran in the "over 65 age category" and finished the race in 232nd position in just over 60 minutes in 1:02:21 (Brigid finishing posiiton is listed two thirds down page 5 and the results finish two thirds down page 7  - very impressive running! 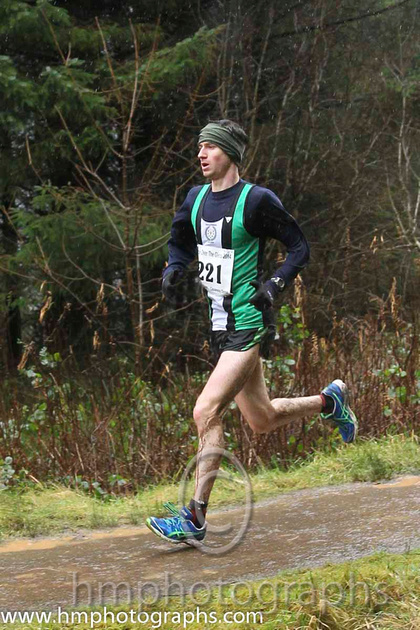