Top Magheramourne based amateur rider, Steven Crawford has decided to retire from the saddle.

He had his last mount at Sligo on 23rd May 2016 when finishing fourth on Carnspindle which he owns and is trained by his brother Stuart.

Steven is one of four brothers running the training operation including amateur rider Ben and Ross and intends assisting his trainer/ brother in their expanding Magheramourne based operation and will also continue to buy and sell young jumpers.

Aged 14, Steven was at Worcester on a visit to relatives and went to the races where at the end of racing he approached John Reid asking how he could get into racing. John was originally from Banbridge and had won the Epsom Derby and the Prix de l’Arc de Triomphe and told Steven to contact him when he was 16. This Steven did and subsequently went to England near Birmingham to join trainer Reg Hollingshead. Reg trained over 1400 winners in his career and was also renowned for producing quality jockeys including champion jockey Kevin Darley and Derby-winning jockeys Walter Swinburn and Will Ryan.

Steven subsequently moved back to Ireland and began his riding career as an apprentice to trainer Liam Browne and remembers riding out at the Curragh on cold winter mornings.

In 1998 in his first year, he won the Irish Cambridgeshire, a listed race, on the Pat Flynn trained Lady Oranswell in a field of 22 runners which included jockeys ; Johnny Murtagh, Richard Hughes, Mick Kinane, Jamie Spencer, Pat Eddery and Kieren Fallon

He then moved back to England and worked as assistant to Jamie Osborne as conditional jockey for a number of years and with Martin Pipe for a short period when he won his first hurdle race in August 2003 at Worcester in a Claiming Hurdle on Doucer Des Songes.

He then joined Nigel Twiston Davies and he won the 2005 Class A, Grade 2, Aintree Bumper on The Cool Guy, in a field of 22 jockeys including; A P McCoy, Ruby Walsh, Karl Llewellyn, Jason Maguire, Barry Geraghty. Tony Dobbin and Mick Fitzgerald.

He then spent five years at the famous Ballydoyle stables working for Aidan O’Brien and was the regular works rider for the 2007 Prix de l’Arc de Triomphe winner Dylan Thomas. He partnered Kieren Fallon for a period on the gallops at Ballydoyle.

In 2012 Steven won the Fegentri (International Amateur Riders Association) title, riding in sixteen jump and flat races in thirteen countries across the world. Stephen won the flat, jump and overall titles becoming the first Irish rider to win all three.

He said “I've been busy the past five years breaking and training young horses and to be honest, the race-riding got in the way towards the end. I'll continue buying and selling three and four year olds and will have five or six of my own at any one time. The best horses I have ridden in recent seasons are Legacy Gold and Gilt Shadow which finished runner-up in the Grade 1 Bumper at the Punchestown Festival. I’ll be kept busy over the summer finding new horses and attending the various sales.”

Steven has ridden at all twenty six race tracks in Ireland in his career and at many of the tracks in England and Scotland accumulating eighty winners in the process. 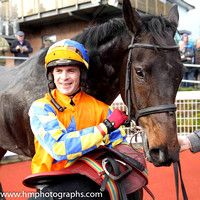 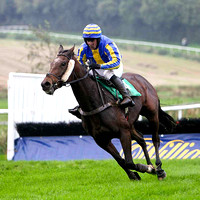 Stevan, Stuart and Edith Crawford + a friend at Down Royal

Stevan Crawford at Down Royal